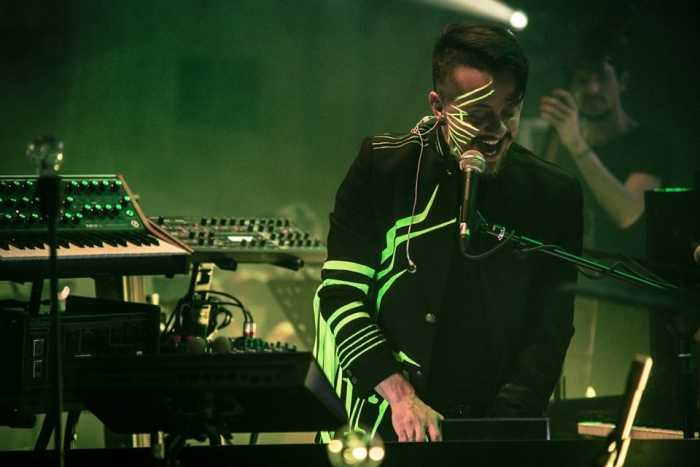 Dardust is the first Italian project of instrumental music that combines the minimal piano sound with the modern electronic world from Northern Europe. Dardust is a project created by pianist, composer and producer Dario Faini: starting from a minimal landscape, his music is enriched with soundscapes and strings created by the violinist Carmelo Emanuele Patti and blended together with electronic paths, co-produced by Vanni Casagrande. Dardust’s name is an ironic tribute to Ziggy Stardust, the well known alien played by David Bowie, who inspired a still enduring space imaginary, as well as a tribute to the duo Dust Brothers (who became famous under the name The Chemical Brothers) and their debut
album “Exit Planet Dust”.
Dardust is a mission that goes across the axis Berlin – Reykjavik -London and draws inspiration from these cities, basing a trilogy of records on them: The first step is Berlin, where the album “7” was recorded (Funkhaus Studios / 2015); the second album “Birth” was instead recorded in Reykjavik (Sundlaugin Studios / 2016). The third album will be written and recorded in London. Dardust is a sound crossover that ranges from the pop culture of Ludovico Einaudi and Sigur Ros to the minimal world of composers from Northern Europe like Olafur Arnalds and Nils Frahm, all combined with the electronic mood inspired by the electro-ambient suggestions of Jon Hopkins.
Dardust is a multidimensional live experience born from a fascinating and emotionally charged classical set mixed with captivating electro sounds and a wide range of spectacular visual effects.

Dardust is Dario Faini – project creator, composer and pianist. Since the publication of “7”, the debut album released in March 2015 for INRI, Dardust established himself as one of the most promising new artists in the independent music scene, gaining great support by MTV. The channel gives him the awards for “Best New Generation Artist” and “Best New Generation Electro” and invites him to perform on the stages of the MTV Awards in Florence and of the Digital Days in Monza.
The release of “7” is accompanied by the remix album “7 remix” that sees the collaboration with Aquadrop, Popolous, Lele Sacchi and Machweo. The remix album captures the attention of BBC Radio and gets to the ears of the worldwide known DJ and producer Diplo. During the summer a special version of Blonde Redhead’s song “Cat On A Tin Roof” is released: Dardust reinterprets the band’s hit revealing his musical imagination without distorting its shoegaze soul.
The success and the international echo of the project is marked with the release of the second album “Birth”, previewed exclusively on Spotify in March 2016 and anticipated by the single “The Wolf”. The song fully represents the musical soul of Dardust: starting from a minimal piano, it ends with a wall of electronic sounds. The record was written and recorded at the Sundlaugin Studio in Reykjavik, merging the two souls of the project, the neoclassical and the electronic one, keeping them both in a clear conceptual split of the tracks presented in the album, classifying them as “Slow” and “Loud”. “Birth” is a transition album that without losing the references to minimalism dives into the most thrilled and loud
electronics, not hiding its dark soul but exalting it with an exceptional feature: a song with SBCR aka The Bloody Beetroots in the song “Take The Crown”.The unanimously acclaimed second album consecrates him in the Olympus of the most listened Italian pianists in the world, starting the path that will lead him to count more than 15 million plays and more than half a million monthly listeners on Spotify. His international fame got him to play at many festivals including Eurosonic (Groningen) in January 2017 and at South by South West (Austin) in March 2017, performing live for the first time “Slow is”, the acoustic spin-off that contains the most famous songs of his discography turned into ballads for piano and string quintet. The album also features two new songs: “Lost and Found” and “Gravity”, the result of a collaboration with Davide Rossi, historical producer of the arrangements of Coldplay, Röyksopp, Goldfrapp and Jon Hopkins.

In January 2017 Dardust is the protagonist of a speech entitled “The perfect music is the one you know how to listen to” for the international TED format at the TEDXTorino organized at the Lingotto Center and accompanied by a live performance, both available for streaming on the official web channels.
To counterpart of “Slow is” was released in November 2017 after a long season of concerts. “The New Loud (remixes, featuring and re-works)” sees the collaboration with Yakamoto Kotzuga, Anudo, IISO and Wrongonyou, who sings on the notes of “Birth” expanding the emotional effect thanks to a heartfelt interpretation.

On February 4, 2018 the song “Lost and Found” was chosen as soundtrack for the touching spot “Hope Detector” for the campaign “Hyundai Hope on Wheels” which aims to raise awareness for the fight against childhood cancer. The spot premiered during the 52nd edition of the Super Bowl, the National Football League (NFL) championship final, one of the most anticipated media and sports events in the world, with an audience of 111 million viewers.

From the day of its launch, the spaceship Dardust has crossed the most important stages of the national and international scene, both with the electronic set in bigger events and with semi-acoustic sets in elegant and smaller stages. Dardust played in many international events like Eurosonic Festival in Groningen, SXSW in Austin, Nilufer Music Festival in Turkey and Airwaves Festival in Reykjavik. He also performed at Cargo in London, as well in national events and festivals like Home Festival in Treviso, Goa Boa in Genoa, Unaltrofestival in Milan, at the Museum of Modern and Contemporary Art in Roma, at the breath-taking setting of Castello Sforzesco in Milan and at Collisioni Festival in Barolo, without forgetting the Auditorium Parco della Musica in Rome and the numerous gigs across the country. Dardust also opened of artists such as Bluvertigo, Of Monsters and Men, Gui Boratto, Interpol, Editors, Tiga, Salmo.
Dardust’s latest tour, “Grand Finale Tour”, saw the participation of several special guests of the Italian music scene with whom the songwriter Faini collaborates as one of the most requested hit makers. This tour marked the end of the second chapter of Dardust’s trilogy: the writing and recording sessions of the third album will take place in London.