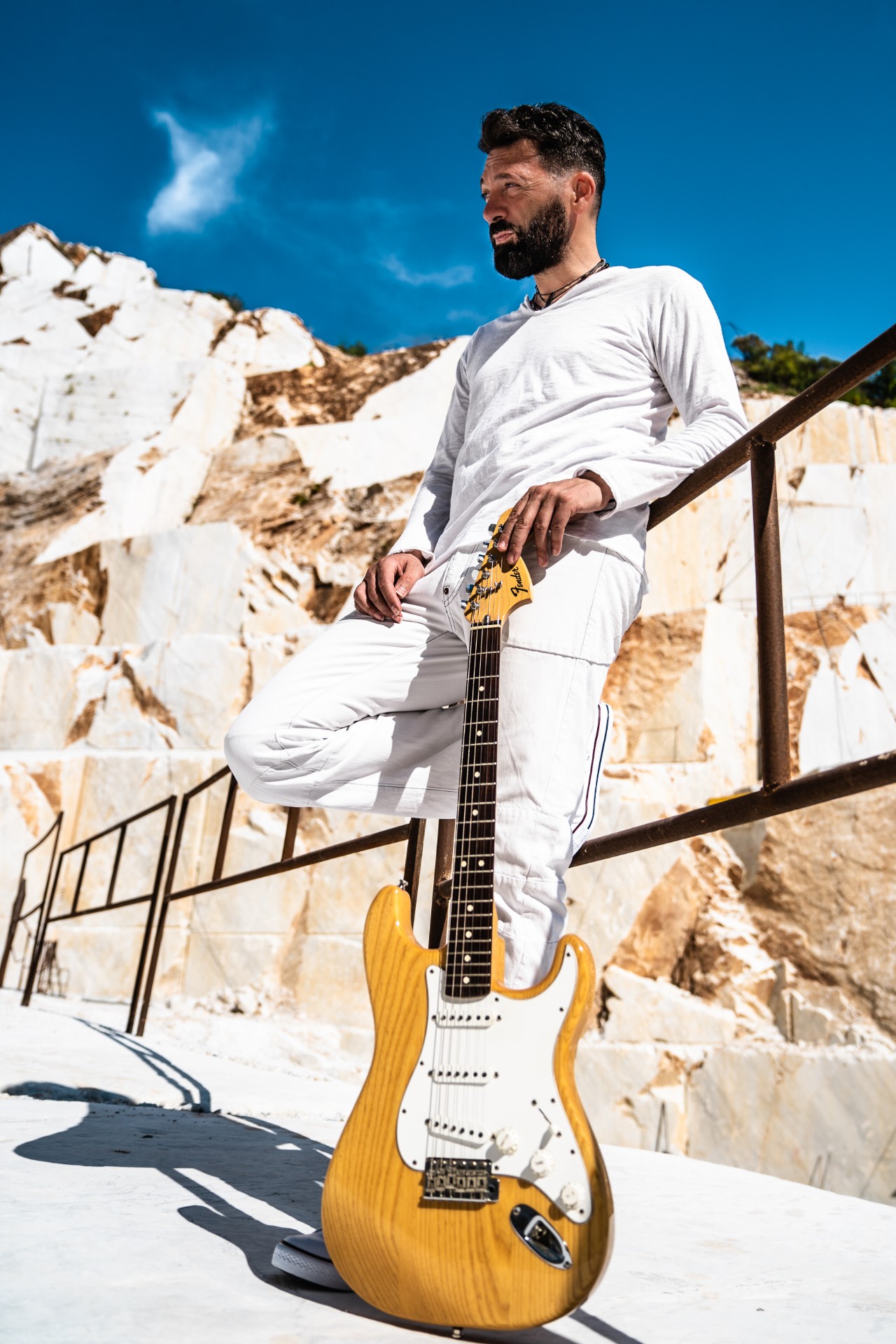 dr.gam is the acronym derived from Andrea Gamurrini’s name and surname; he is a singer, guitarist, multi-instrumentalist, songwriter, producer and videomaker. The “heart” of his name and the “head” of his surname were chosen to represent the essence of “instinct” and “reason”.
He begins to study the English language and the piano at the early age of 5 and by the time he reaches the age of ten he has moved on to the classical guitar and attends the G. Rossini Conservatory in Pesaro, Italy. To the surprise of his music teachers, he begins to write short preludes for classical guitar at this very early stage of his life, demonstrating innate creativity…..but in the meantime,
something was already starting to change. Andrea’s curiosity, eagerness to experiment and to take on challenges began to shape a versatile artist. In fact, he was soon drawn towards other musical genres and was particularly taken by the diverse sounds of the Anglo-American world, and still only a youngster, he begins a series of collaborations with several Italian and international musicians, taking part in many albums and compilations.
Thanks mostly to his “dr.gam” project, he then embarks onto the scene of live performances, up to 1700 gigs in all performed for thousands of people, all over Italy but also Europe and the U.S.
In 2012 in a two-year-long, 120 concert Tour which took place after the release of his live album, “The New Medicine Show”, produced by Vallemania Records, during a live concert, he was noticed by Velio Gualazzi (father of the Italian artist Raphael Gualazzi) who drove him into the world of discography.

So he begins working at the album “Another Family” produced by White Coal Productions which will be out in November 2016, (Lungomare/Jois – UNIVERSAL MUSIC GROUP), advanced, in July, by the single “dr.gam is in da house”, launched in UK and all over the world by KFM radio of Manchester, that enters immediately in the international Spotify music chart.
Another Family earns a reprint in the US and Canada and receives immediate acclaim from Italian music critics.

The 2nd single “Italian Rastaman”, out in October 2016, was air played on more than 400 Italian and international radio stations, and for several weeks was the 2nd more liked track sung in English language (Indie Music Chart). The related video, recorded in Fuerteventura (Canarian Islands – Spain) directed and produced by dr.gam, was played in more than 150 Italian and international TV channels and collected more than 480.000 views on YouTube.

In spring 2016 the remix of “dr.gam is in da house” edited by Corrado Cori DJ, distributed by Believe, was out, anticipating the third single of the album, for the first time in the Italian language, entitled “Ritmo Ideale”. The related video clip, directed by dr.gam, out in June 2017, had the exceptional preview on the front page of the press agency AskaNews, taken simultaneously by important Italian radio network and national newspapers such as: RDS, Il Sole 24 Ore, Il Tempo, Il Quotidiano Libero, QN (Il Resto del Carlino, La Nazione, Il Giorno), Yahoo, Virgilio, Tiscali and many others. The summer tour 2017 between Italy and Spain earns another reprint of the album “Another Family” in the Iberian peninsula and in fact, after the release of the video “Our Roots” filmed in Jamaica and published in October, from 1 December 2017, the first single “dr.gam is in da house” and related remixes, come out in all the Spanish radios.

After the release of Italian Rastaman Corrado Cori Remix (Believe) at the beginning of the year, from July 6th 2018 the first foreign reprint of “Another Family” album is in all FNAC and El Corté Ingles stores of Spain, Portugal and Andorra to launch the artist on the Latin path. Meanwhile, in Italy, Andrea is noticed by one of the top orchestra conductors, Peppe Vessicchio, who wants him as a guest at the close of his national tour “Musica Maestro” at the Concordia Theatre in San Benedetto del Tronto (AP), for which he composes an arrangement for strings for the medley prepared by dr.gam especially for that important occasion, performed together with the “Solisti del Sesto Armonico”. The maestro, in front of a packed audience, declares that “dr.gam as a composer, has an innate sense of displacement, which is the ability to surprise the listener, leading to being pleasantly subdued and deeply involved……a quality that is lacking in the vast majority of contemporary music, which on the contrary is predictable, complacent and consequently soon forgotten”.

From March 2019 the album “Another Family” is distributed worldwide by Universal Music Group and on September 2019 the CD format will be re-issued and distributed throughout the USA and Canada (Lungomare/Jois/ApplausoUS – CD Baby).