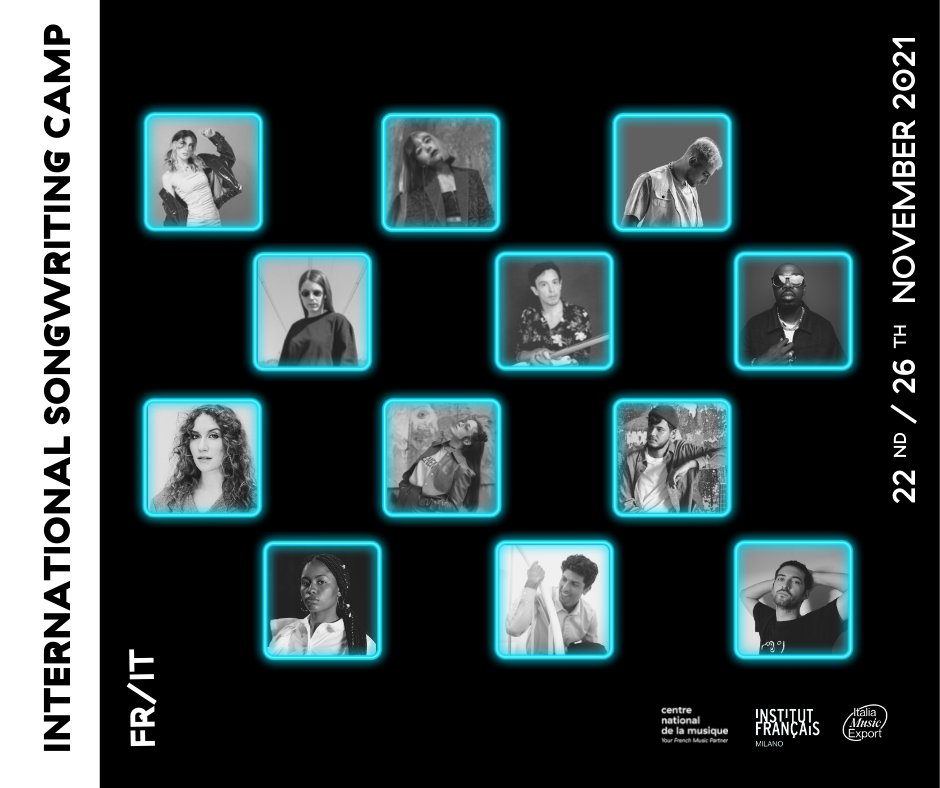 International Songwriting Camp 2021: here are the names of the 12 participants

The International Songwriting Camp 2021 will happen during the Milano Music Week, from 22 to 26 November. This unique initiative organized by Italia Music Export and CNM (Centre National De la Musique) will bring together Italian music creators and French ones. Let’s find out who they are.

When creativity and art cross geographical boundaries and cultural barriers, the results will be amazing. This is what we expect from the days during which the International Songwriting Camp 2021 will take place. It is a co-writing campus that this year will take place with the collaboration between Italia Music Export and the French colleagues of CNM. This initiative, unique in its kind, is aimed at promoting the creativity of Italian music creators from a perspective of international collaboration. Six Italian artists and producers will meet with six French artists and producers for a five-day co-writing event. The event will end with a listening session scheduled for Friday, November 26, at the Institut Français in Milan, in the presence of the respective publishers.

Here are the Italian participants of the International Songwriting Camp 2021.

Born into a musical household, Alessia Labate was first discovered as a contestant on the Italian talent show “Io Canto“, at the age of 12. Then, when she turned 17, she participated in “The Voice of Italy“. In 2019, she released her first single, signed to a NY-based management company, and started travelling to collaborate with producers and songwriters from around the world. Her latest pop single Conversations With Myself was featured in “MTV New Generation Italy” and I Want My Heart Back, with Sam Luck and NRONE, was heavily supported by “BBC Introducing”.

ELASI is a singer-songwriter, guitarist, and producer whose musical style is imbued with travel around worlds, real and imaginary. In her tracks, we hear exotic rhythms, ethnic instruments and digital experimentation that crosses any border, geographical and genre. In 2018 she released her first single, Benessere, and then she began performing at prestigious festivals, including MI AMI and Home Fest. ELASI’s latest work is COCORICÒ, released in 2021.

Born in ’96, Simone Sacchi, aka See Maw, is a musician and producer. He composes and produces his own tracks in complete autonomy. His sound is a nocturnal, rarefied, personal taste electronic, at times wonderfully dark, wandering through synth-pop trajectories. After the self-release of his first EP Ghiaccio in 2019, he joined the team of Undamento and in 2020 released his first album A luci spente, anticipated by the two singles Venerdì, with Dola and Dado Freed, and Champagne. He is currently working on his new project in which his music evolves again, ranging between electronic sounds and pop attitude.

Domenico Finizio is a composer, producer and multi-instrumentalist based in Milan. He is the co-founder of the band Tropea. In the last year, Domenico has been working with many artists from the Italian music scene such as NAVA, Ginevra, La Hasna as a producer, songwriter or guitar player. The songs he writes and composed for Tropea talk about dreams, ASMR, internet subcultures, cringe life and self-awareness.

Mattia Del Moro, a.k.a. Delmoro, is a songwriter, producer and multi-instrumentalist born in Udine. He plays music since he was 12 years old, but his passion for design led him to study architecture. Music and design have always been the main focus, finding many crossing paths between one and another. In 2016 he joined the band Mind Enterpri-ses (Because Records) for the European tour, playing in famous music festivals. In 2018 he self-released his first solo Italian record, Il Primo Viaggio, and the following year the EP Balìa. His latest LP is Rendez-vous, released in 2021.

Matilde Ferrari, a.k.a. PLASTICA, is a young Italian producer, multi-instrumentalist and DJ. She was one of the finalists at Jäger Music Lab 2019 in Berlin, among the best-known contests for electronic music. She worked with some of the most interesting Italian artists and producers – such as Splendore, Inoki, and Laila Al Habash – and was resident DJ at Rocket Club (a Milan-based relevant club for independent Italian music scene) and she is now resident DJ at Radio Raheem. In 2020 she signed to Sugar Music Publishing and published her first single Lava. In 2021, she released her latest single, Citrosodina, featuring La ragazza dello Sputnik. 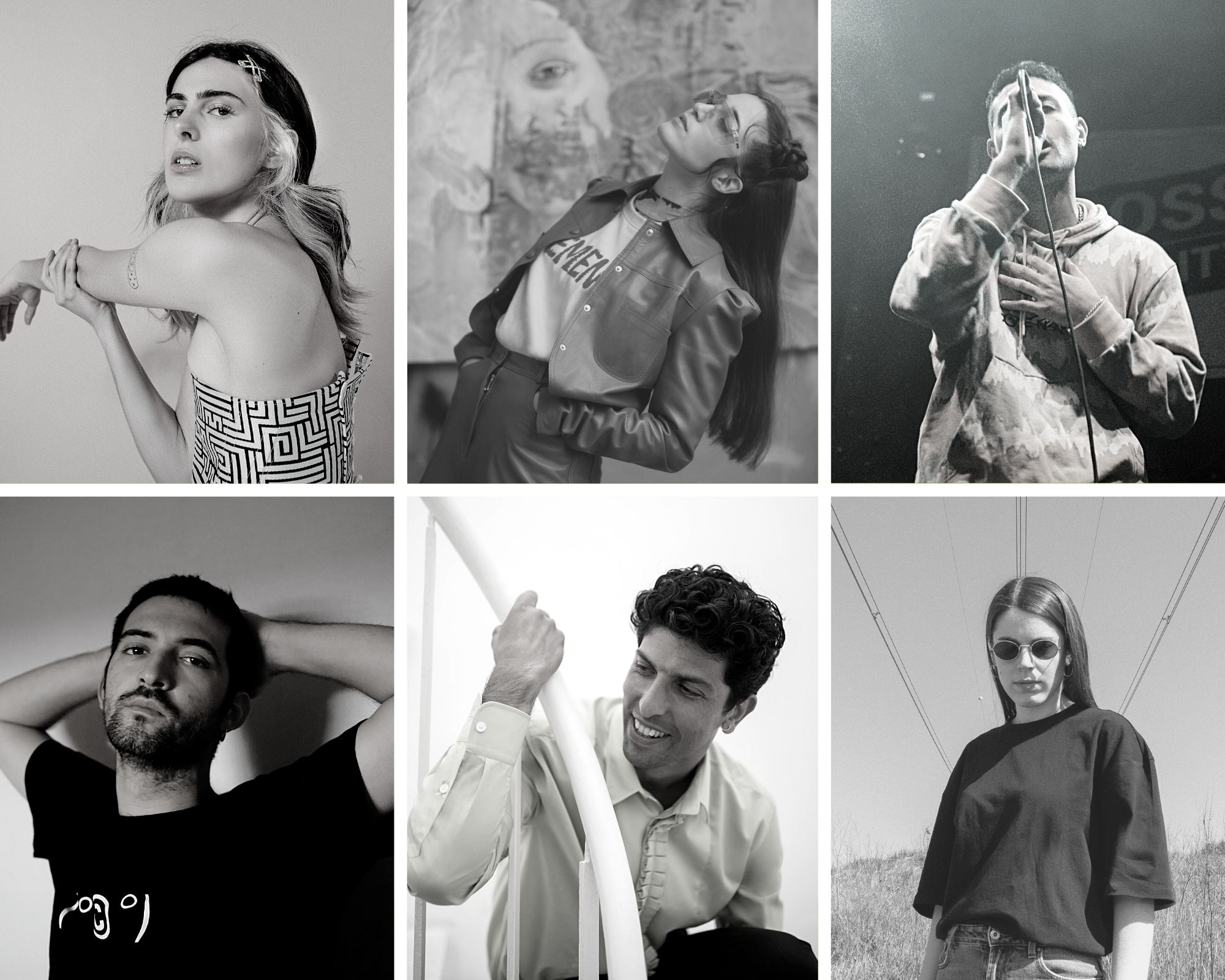 Now let’s find out who are the French artists and producers participating in the International Songwriting Camp 2021.

Anoraak is a French musician, multi-instrumentalist, singer, producer and DJ. Now based in Marseille, he was a member of the band Pony Pony Run Run as well as the Valerie Collective. Formerly identified with the early retro-synth driven scenes that later inspired the classic movie Drive’s soundtrack, his sound is described as “dreamy synth-filled tracks that fall somewhere on the spectrum between disco and new wave”, “contemporary but retro-tinged”. Anoraak has 3 eponymous albums, numerous eps, and collaborations. He has performed at major global music festivals and events, including SXSW, Noise Music Festival, Festival Des Inrocks, Electric Daisy Carnival, and also toured internationally.

Romane was born in Lille and moved to Lyon with her family when she was only six years old. Growing up, her childhood was filled with African-American music. Her parents would listen on repeat to albums by Bob Marley, Michael Jackson and Cesaria Évora, and Romane also discovered the world of rap and R&B through her five siblings. At the age of 15, she met the British producer Dan Black, who fell for her voice, and started to build her artistic career. In 2021 Romane released her debut EP, I Know, a mix soulful vocal with Dan Black’s stylish Brit-Pop productions. The first track taken from the EP is Fantasy, accompanied by a colourful video with a fresh, invigorating vibe to match that of a 22-year-old woman who believed in her dream.

Thérèse is a French musician, a fashion stylist, a model and an activist. She was the singer of the duo La Vague between 2016 and 2020. However, during the lockdown, she wrote and composed several tracks for her new solo project, Thérèse. The first single T.O.X.I.C was released in July and her debut EP was in February ‘21. This record is a mix of pop, hip-hop, electro and bass music with an Asian touch. In fact, she sings in English, French and Chinese. The ambition of this project is to grow in France and abroad.

Self-taught, Iris JOKO composes in English with the words of wonder and disorientation. These words come from her dreams while as a child from her travels in Ireland, Scotland, the U.K. and Canada, where part of her family lives. Then, we find their origin in the heroes JOKO listened to passionately as a teenager: The Beatles, Janis Joplin, Aretha Franklin, and later: Lykke Li, James Blake, FKA Twigs. Her bewitching timbre, fabulous arrangements, grace and generosity in concert have established JOKO as one of the most endearing and inspired artists on the new electro scene.

James BKS’ life begins in France in 1982, but radically changes when his family moves to the United States. Over there, within a prolific musical scene, he discovered hip hop production alongside his own talent, that he never knew existed. At the dawn of the 2010s, his will to regain control over his musical creativity led him to return to France and set up his own structure, Grown Kid. Building a strong bond with his father, he started to discover his roots and his musical vision takes an unprecedented turn. All his influences can be seen (and listened to) in his songs such as Kwele or Kusema.

Joseph Kamel is a Franco-Egyptian singer-songwriter of 25. His musical universe is directly influenced by the new French musical scene, in particular by Ben Mazué, Terre Noire and Stromae. His music is deep, percussive, and inspiring just like his voice. Faithful to his roots but anchored in his generation, Joseph produces songs combining pop, electronic and slam music. His first EP, released in 2021, reveals his singular, endearing and touching musical universe. 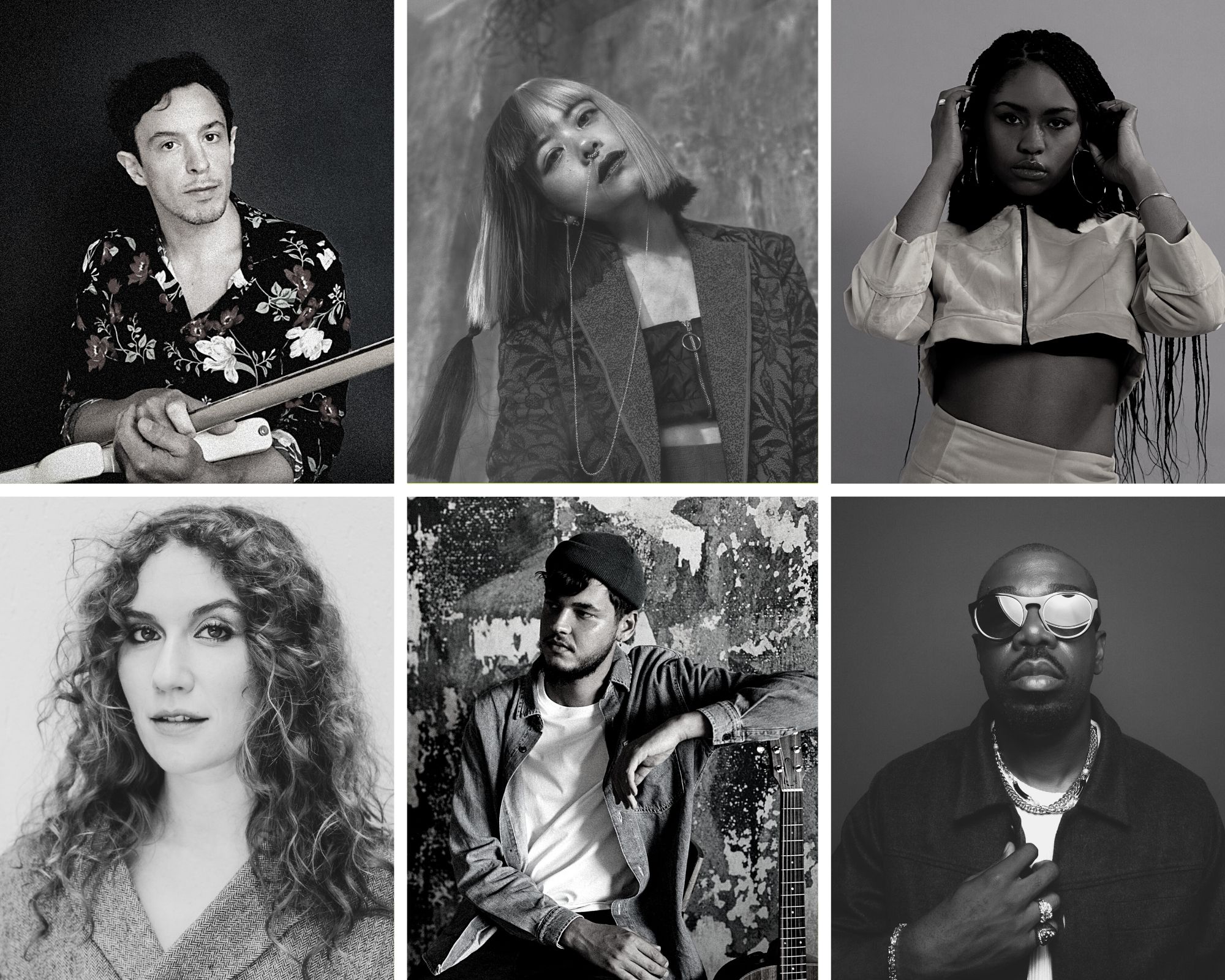 Listen to our playlist with all International Songwriting Camp 2021 artists!