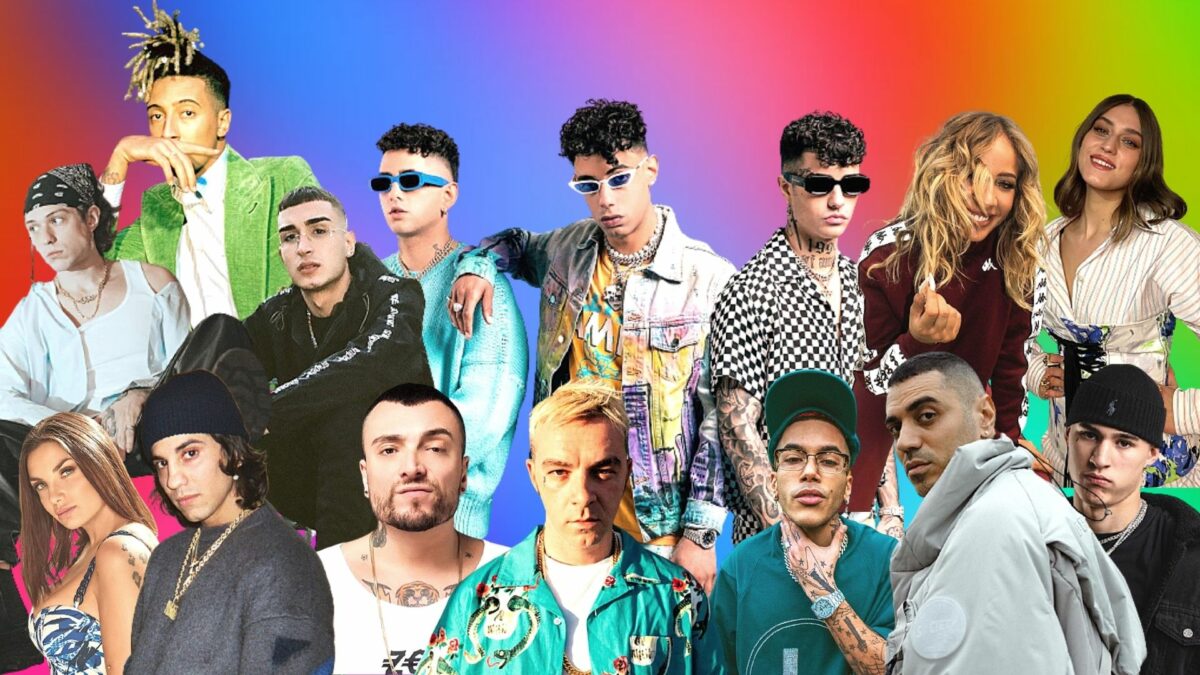 The Italian black music scene, which includes rap, trap, drill, but also other trends such as Latin sounds and contemporary pop, is steadily growing within the music industry.

If we compare today’s black music market share to that of  2015, we can see a significant increase. To demonstrate such growth we can see that in 2016 there were only three Italian rap albums in the top 30 best-selling records in Italy: “Hellvisback” by Salmo (13th), “Santeria” by Marracash & Guè Pequeno (24th), “Nonostante tutto” by Gemitaiz (26th). In 2017 instead, we find J-Ax & Fedez (2nd), Ghali (5th), Fabri Fibra (9th), Guè Pequeno (10th), Coez (11th), Caparezza (13th), Sfera Ebbasta (19th), Dark Polo Gang (23rd), Tedua (29th), and at the 30th place again “Santeria“, a year later. The presence of the genre in the top charts has, therefore, more than tripled in a single year, and the number of copies sold have also nosed up, bringing four artists from the black music world in the top-ten best-selling records.

From a market point of view, 2020 can be considered a turning point.
“Persona” by Marracash, scored as the fifth best-selling album of 2019. In 2020 the album triumphed as best-selling album of the year in Italy. Marracash’s success is followed by seven black music records by Sfera Ebbasta, tha Supreme, Ghali, Guè Pequeno and Ernia – these are, in this order, the six best-selling records of the year, while Tedua’s “Vita vera mixtape” ranks tenth.

Looking at the top 30, we observe the Machete Crew with “Bloody Vinyl 3”, Geolier, Salmo, J-Ax, Emis Killa & Jake La Furia, Lazza, Elodie, Rocco Hunt, the “Machete Mixtape 4” (from 2019) and Achille Lauro. Even when it comes to the best selling singles of the year, the black music takeover is confirmed: the top-selling one is “Karaoke” by Boomdabash with Alessandra Amoroso. In the rest of the top 30 we find Rocco Hunt, Irama, Ernia, Shablo with Geolier and Sfera Ebbasta, Guè Pequeno with Rose Villain and Luchè, Baby K, Fred De Palma, Fedez, tha Supreme, Carl Brave, Ghali, Salmo, Random and Elodie.

After years spent laying the grounds, the Italian black music scene now owns the biggest share of the recording industry in Italy. 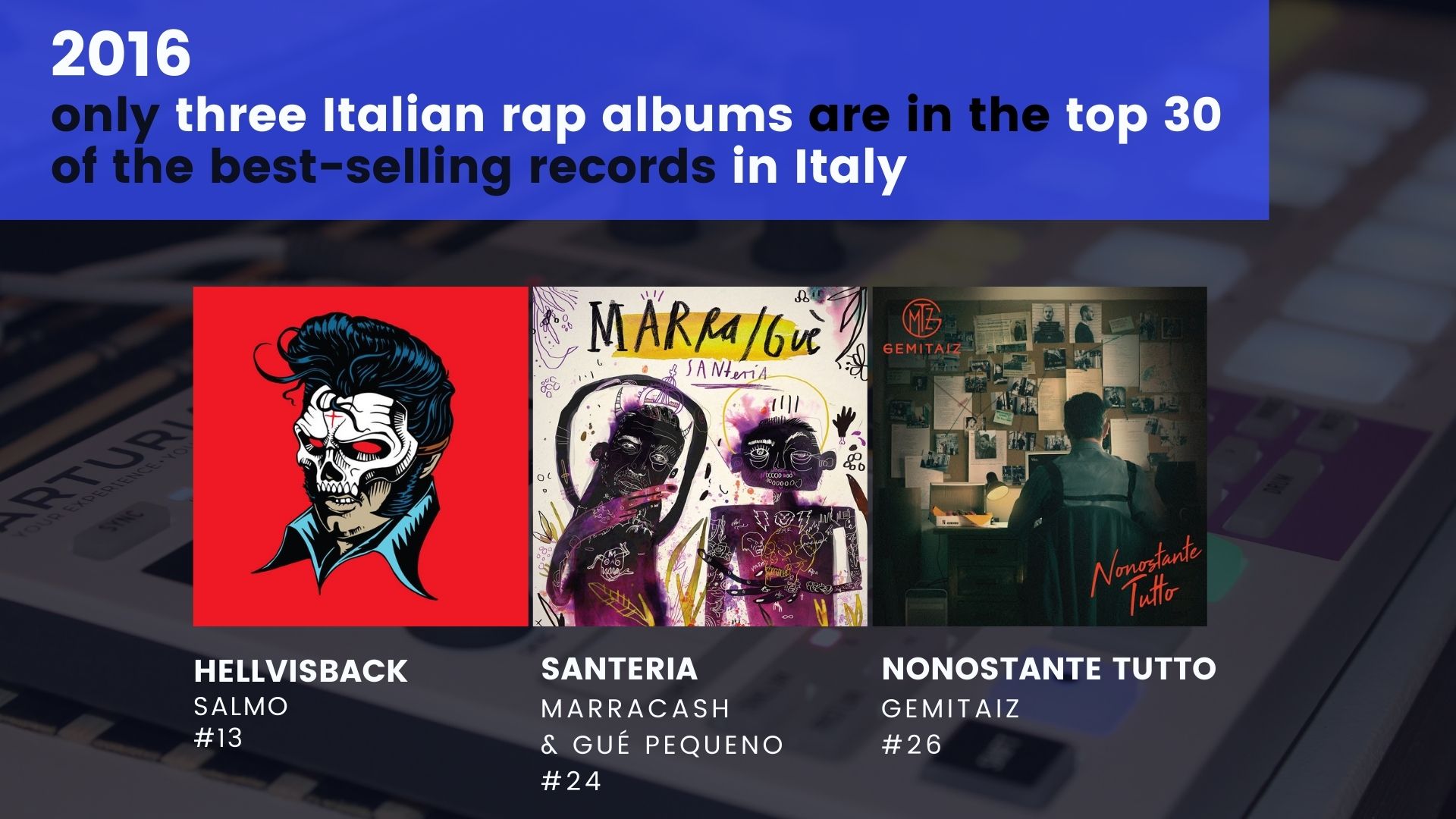 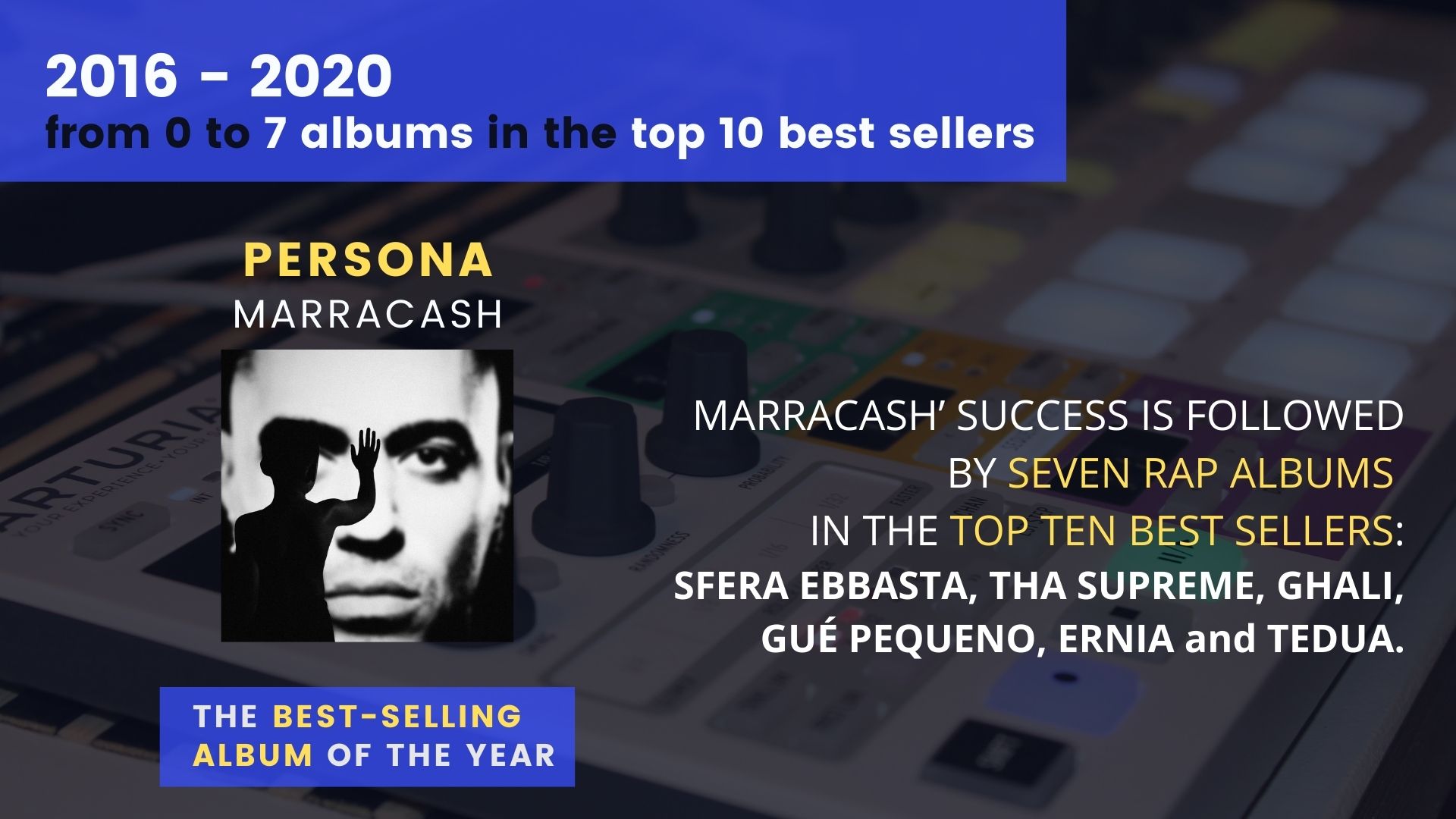 Italy & the rest of the world: it’s time to build connections:

Today, Sfera Ebbasta is the biggest artist in the Italian black music scene thanks to millions of monthly listeners and international collaborations of the level of Quavo, Offset, Future, SCH, Tinie Tempah, Miami Yacine, Lacrim, J Balvin, and many others. Along with him, other artists have begun to build important collaborations with foreign colleagues in different ways.

Some of these collaborations are the result of record label deals, however, Italian artists have shown they have created real connections with foreign colleagues by doing studio sessions with them, attending public events, visiting their cities, and posting on social media. These kind of relationships go well beyond the record deal, as in the case of “Baby” by Sfera with J Balvin.

To mention others, Ghali and Stormzy; Capoplaza, Ninho and Morad; Mahmood and Feid (thanks to the amazing success of “Soldi“, winner of Sanremo festival in 2019 and #2 at Eurovision, Mahmood has become widely recognized all over Europe); Izi, Dosseh and IDK; Lazza and Kaydy Cain; Rocco Hunt and Fred De Palma with Ana Mena; Rondodasosa and Central Cee. These are just some of the names that are starting to pave their ways abroad, creating organic and long-term collaborations bringing together the Italian music scene with the rest of the world, and vice versa. 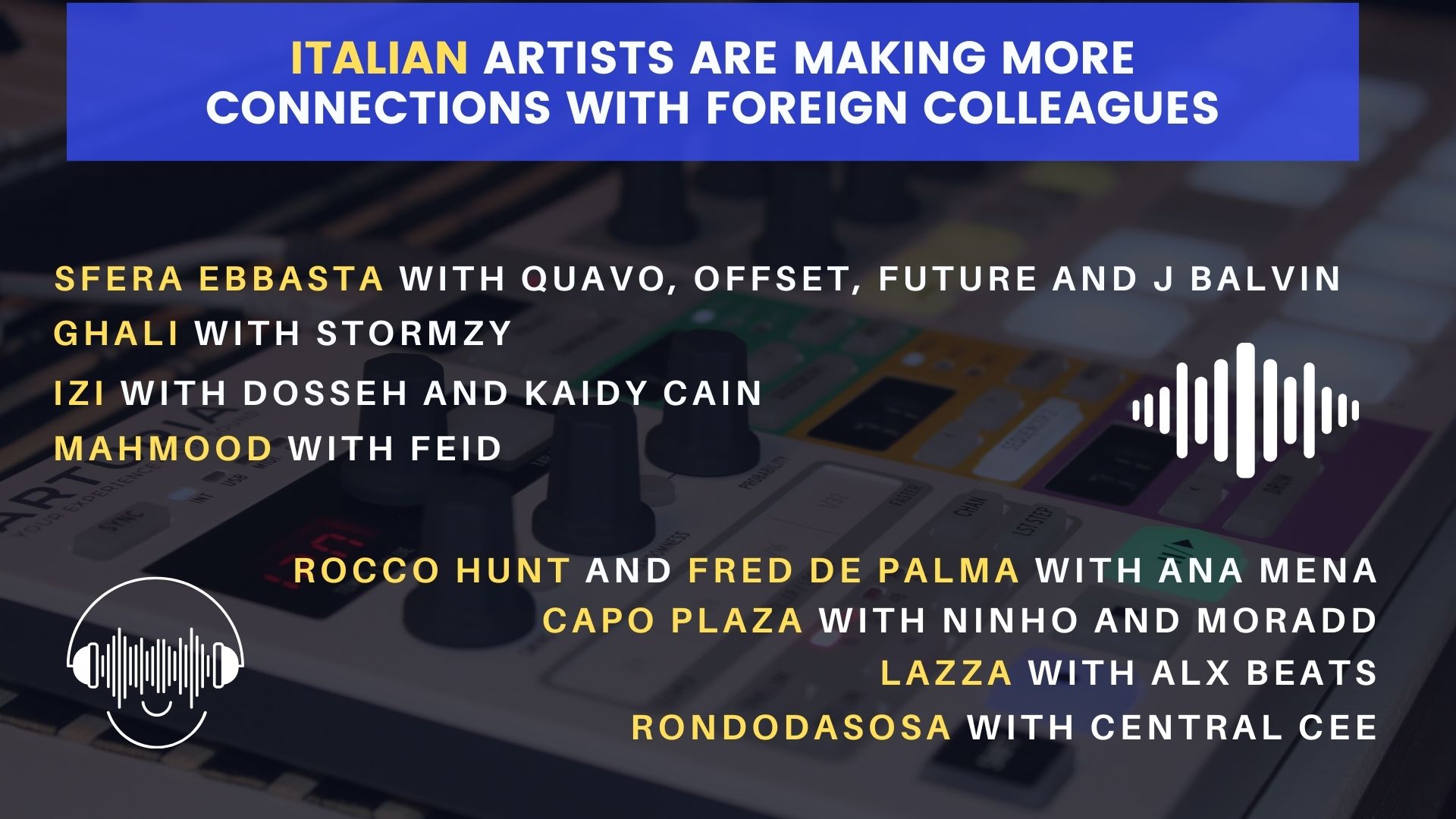 Who are the listeners and what do they listen to:

The Italian average black music listeners are young, in their adolescence or pre-adolescence years, and find relatable the references of the most contemporary rap trends, especially trap and drill.

Trap has basically dominated the sound of Italian rap in the late years thanks to the absolute triumph of Sfera Ebbasta, and also thanks to the influence of American and French successful artists, such as Migos or PNL. The Italian 2015-16 revolution started with trap music, but later the artists began to experiment and look for their own style, moving away from the trap sound that in the meanwhile heavily influenced pop music (just look at the collaborations of Justin Bieber or Ariana Grande).

Italy, on the other hand, has also contributed in moving away from the “classic” trap, giving birth to something new. The most influential exponents of this new wave are Tedua, Rkomi and Ernia, who created something particularly distinctive and unique from a lyrical point of view.  They kept the trap sound as melodic base, but changed the lyrical approach: their songs are not so much about the gangster’s cliché situation, violence and crime, but more often their focus is on emotions. These artists started looking into themselves and describe the society that surrounds them, trying to inspire a positive change in their young listeners.

Considering the underground scene too, there are some unique projects that can’t be compared to anything coming from the U.S. or France. An example is the pure storytelling flow of Murubutu, the emotional lyrics of Claver Gold, or the intricate poetry of Dargen D’Amico. Artists of their kind and others like Noyz Narcos, Marracash, Guè Pequeno, Jake La Furia, Luchè, are able to connect with an older audience, who has been following them throughout their careers, thus growing up with them. The adult rap-listeners are more interested in the lyrics, which are often deeper and meaningful in the underground scene. Some exceptions in the mainstream scene can be found nonetheless: Nitro, Salmo, Fabri Fibra and Jack The Smoker, are some of these, besides the names mentioned earlier.

The recent spreading of the drill genre on a global scale – thanks to the huge success of Pop Smoke – has arrived in Italy too, influenced by its English version, rather than the original one born in Chicago. Artists such as Rondodasosa, Baby Gang and Sacky have become known thanks to their drill music.

In general, many artists from the scene are now experimenting with these sounds to show their ability, but also aim to intercept a trend destined to grow faster. However, it’s hard to think that drill will reach the size of the trap phenomenon because it’s not as catchy as the former one.

The most important cities for the Italian rap scene, past and present:

The most important city for the Italian rap scene is Milan. Labels, Management agencies, press offices, distributors are mostly set in this city, as the majority of the professionals lives there. The same goes for rappers, producers and musicians. Milan saw the birth and growth of Articolo 31, Sottotono, Marracash, Jake La Furia, Guè Pequeno, Don Joe, Bassi Maestro, Fedez, Emis Killa, Sfera Ebbasta, Ghali, Lazza, and more recently the Milanese collective behind Seven 7oo, led by Rondodasosa, probably the next big thing in the scene.

Bologna and Rome are the other two cities particularly important for the history of the genre, both birthplaces of groups and artists who have made the history of Italian rap. The Italian rap movement was actually born in Bologna, thanks to Isola Posse All Stars and “Sfida al buio” by Dee Mo, and thanks to “SxM“, the first and only record by Sanguemisto – a group composed by Neffa, Deda and Dj Gruff – considered by many the best Italian rap record ever. Later on, between the 90s and the early 2000s, Bologna was the center of Italian rap thanks to Joe Cassano, Inoki, Porzione Massiccia Crew.

Rome was also the birthplace of some of the OGs of the italian rap scene: Assalti Frontali, Colle Der Fomento, Frankie Hi-NRG, the mega-crew of Rome Zoo; then came the Truceklan, a group that deeply changed Italian rap with a dark, cursed, and decadent imaginary. A further revolution took place later in 2015 and with different stylistic references with the emergence of the Dark Polo Gang.

Naples is also a very important location for the rap movement. In the last years, the excellent work of artists such as Luchè, Geolier, Coco, Lele Blade, Enzo Dong and Samurai Jay contributed to rising the reputation of the city regarding the rap music scene.

In the last few years, Genoa has also managed to stand out strongly thanks to their genuine influences from the Italian singer-songwriters from the past “Scuola Genovese movement“. Another factor may be the birth of several collectives like Wildbandana and Drilliguria, which include, within their ranks, mainstream and successful rappers such as Tedua and Izi, but also names that are making their way. Lastly, the direct link to Mediterranean sounds contributes to enriching the Genoese scene too. For example, this may be the case of Bresh, or we see other rappers who still remain inspired by a more classical approach, as in the cases of Guesan, Disme, Vaz Tè. Either way, the Genoese panorama it’s getting more attention every day that goes by.

Turin also hosts an excellent school of rappers and producers, from The Next One to Ensi and One Mic, with the new generations on a rapid rise. 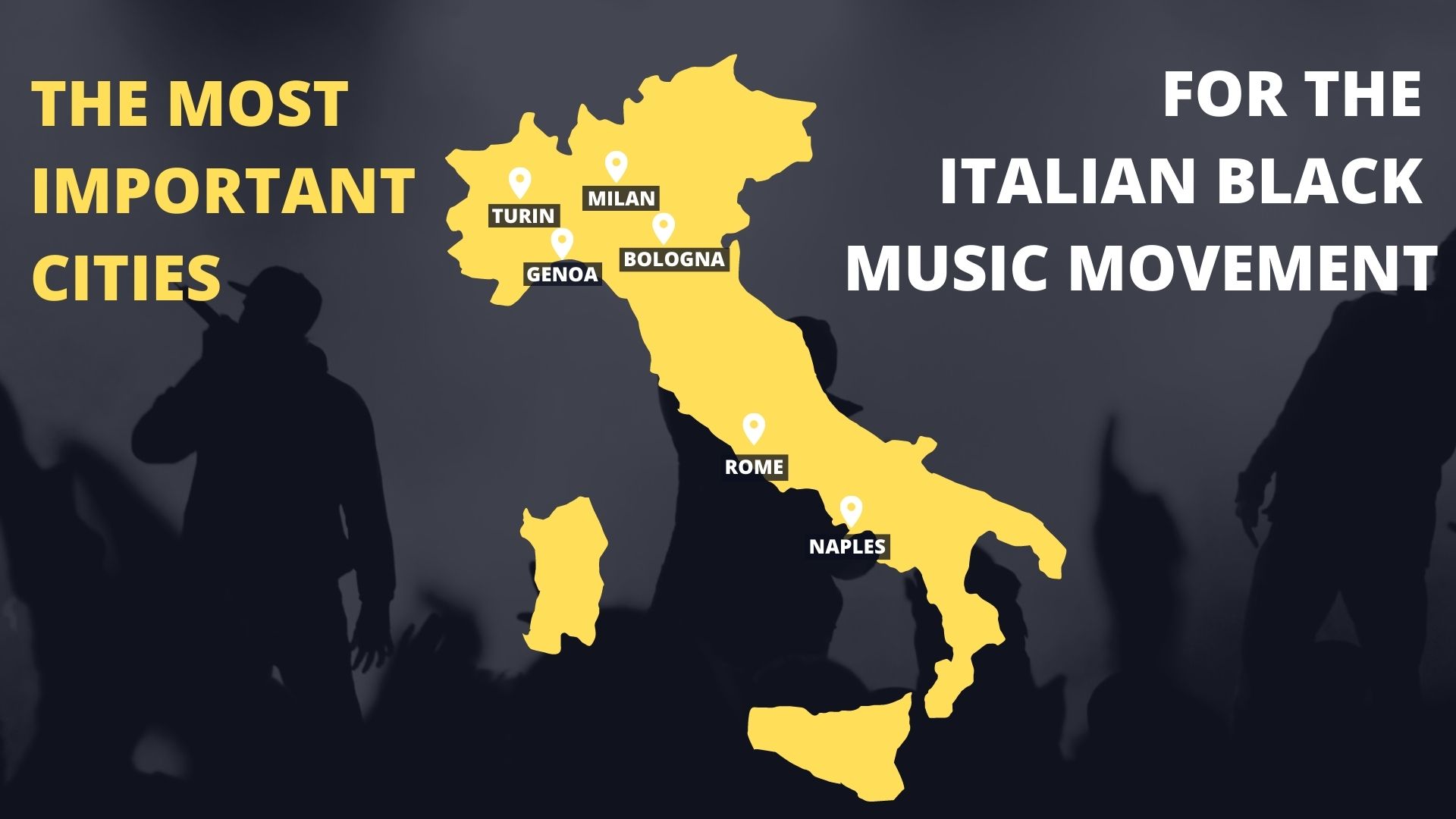 What’s happening and what’s next:

Thanks to the triumph of the mainstream black music scene, even the underground movements are getting more and more attention, conquering a wider audience. The success of the mainstream market has a positive impact even for the ones which are far from the pop spotlights. This achievement helps the Italian black music scene develop not only in terms of numbers but also in terms of variety.

As many Italian rappers are collaborating with foreign artists, an increase at the music export level is expected, mostly in the European or the Latin American music market.