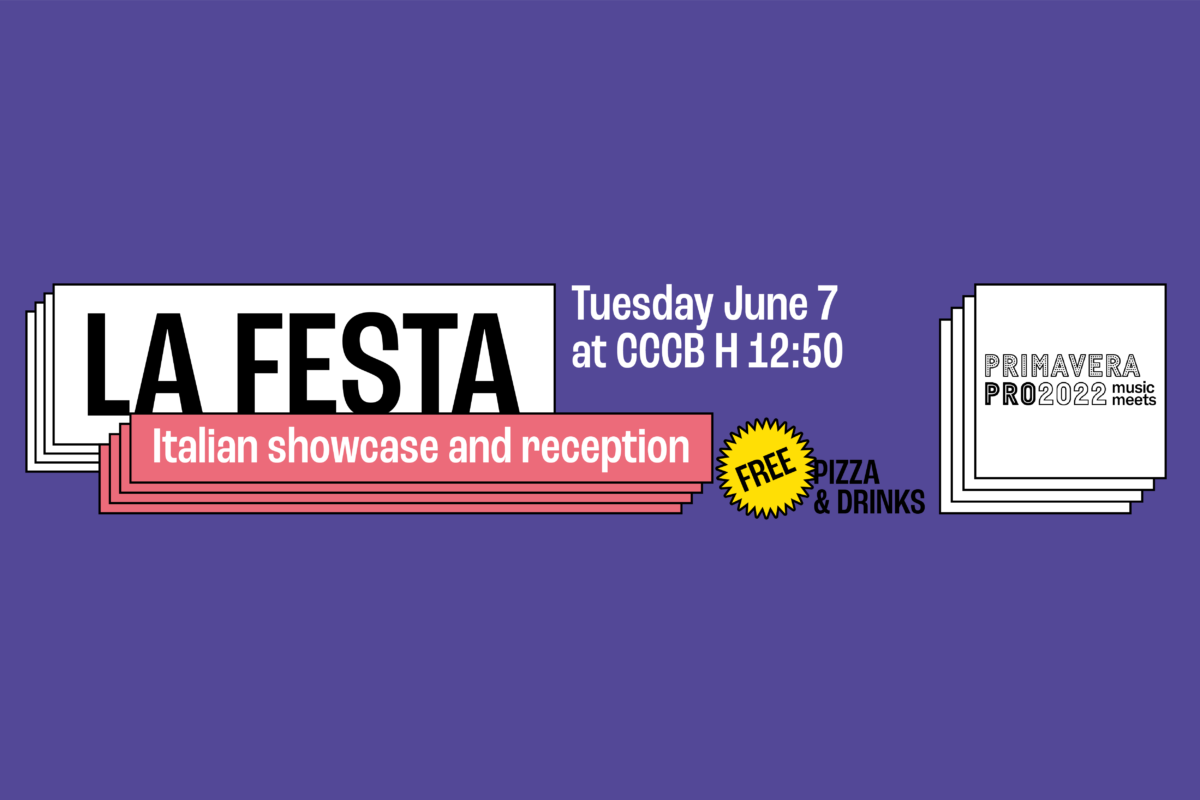 Three Italian artists will be playing on the stages of this year’s Primavera Pro!

Primavera Pro is a global meeting point for the music industry, providing a view into what’s new and what issues the industry faces. This meeting culminates in the celebration of the annual international summit in Barcelona during Primavera Sound week. For five days, the status of the music industry is debated with some of the most well-known specialists in the area, dozens of newcomer bands are shown, and professionals from all over the world are given access to all of the resources they need.

The Spanish festival will take place in Barcelona from the 2nd to the 12th of June at Parc del Fòrum.

As part of this year’s lineup, we will see the Italians Her Skin, KOKO, and Nother.

Join us at La Festa to enjoy their showcases with free pizza and drinks! 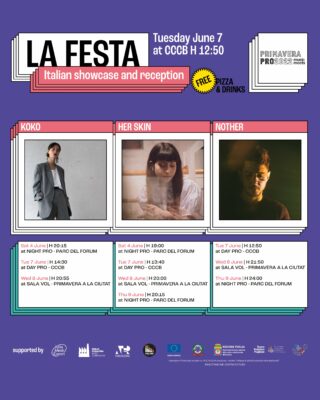 Her Skin was born as the personal project of Italian singer-songwriter Sara Ammendolia. Her sad and melancholic lyrics are mixed with delicate melodies, resulting in songs full of folk with a hint of punk. In 2018 she released her first album, Find a Place to Sleep, and is now preparing to release her second LP, I Started a Garden. In its nine-song tracklist, she tells us about her chaotic youth and the loneliness of being in a place that doesn’t belong.

Costanza Delle Rose is know for being on the scene with Be Forest, band in which she writes lyrics, sings, and plays bass, and with which she toured extensively from the US and Mexico, to all of Europe and Russia. After moving to London during a year of immense changes in her life, Costanza found fertile ground to bring to life her new project, KOKO, a deeply reflective expression of her most sincere self, with no artifacts or filters to protect her. KOKO is Costanza’s soul out in the open, brave enough to experiment with sound and new lyrical approaches, and free to be fragile and vulnerable to her feelings. After posting an unannounced video for the song “I Want to Be” in the spring of 2021, KOKO is now debuting with a 7 track album by the metaphorically on-point title “Shedding Skin”, to be released on October 17, 2021.

Nother is the solo project of Stefano Milella. With acalm and absorbing electronic style, his music is meant to be listened to both through headphones and on the dancefloor. After spending a year exploring and experimenting, he released his first album, Future Is Bright, in a union of electronic pop and piano chords, and with the vocal collaboration of Moon Leap, Endless Recall, Matilde Davoli and Grecale. To date, he has participated in three films and performed at festivals such as IAMX International Expo (China), SXSW (USA), Bestival (UK) and Strawberry Festival (China).

Discover more about the other international artists at Primavera Pro:

A playlist to travel around the world

Not only Primavera PRO

Don’t miss the three must-see Italian artists who are going to perform at the first weekend of Primavera Sound Barcelona 2022 from June 2nd to 4th.

Valentina Magaletti is a drummer, percussionist and composer whose goal is to strategically enrich a folkloristic and eclectic palette through endless listening and experimentation with new materials and sounds. She has performed and co-written with many artists including Nicolas Jaar, Jandek, Charles Hayward, Graham Lewis, Thurston Moore.

Lorenzo Senni
Imagine that at that moment when you are just about to, just about to… you lasted a whole hour. That is more or less what a Lorenzo Senni concert is like. During the last almost 15 years that he has been exploring the links between computer studies and composing music, the Milan artist has always made an effort to put this research into practice by deconstructing rather than constructing. A process that culminated in Persona and The Shape of Trance to Come and that he continues to fine-tune on Scacco Matto, where his sound, that is halfway between trance and 80s IDM, takes you by the hand and anticipates a climax that never comes.

Of all the demigods of the techno Roma (Leo Anibaldi, Bochum Welt, the D’Arcangelo brothers…), Lory D is the producer who most deserves his own temple. He is now a classic figure of modern mythology. Since 1989, Lorenzo D’Angelo has been working towards divinity thanks to his tireless work in the area of black on black: guttural guitars, old-school hardcore and prickly acid for labels such as Sounds Never Seen, Wireblock, Numbers and recently Seilscheibenpfeiler. Outstanding disciple of Aphex Twin, Suicide, Drexciya, Ligeti, Frankie Bones and Underground Resistance, Lory D is an incorruptible, self-taught obscurantist who (we say) hasn’t needed maestros for years now. The fibre that makes up the sound fabric of his productions is indestructible. It is never inappropriate, that is for sure, and it is equally flawless. No, he definitely can’t be mortal.

Iosonouncane
Franco Battiato began the eighties singing on a solitary beach. Thirty years later, Iosonouncane found himself in a similar setting, only now the beach was packed; voices and noises that had become the acoustic pollution that invades and troubles the songs. This nod to the Sicilian maestro says a lot about Jacopo Incani’s position in the Italian world of singer song-writing, between tradition and the iconoclastic itch. His voice, at times sullen, leans when he feels like it towards the melodious amaretto of Lucio Dalla or Ivano Fossati, but the excess of information in the new millennium leads him to treat the creativity in his arrangements with authentic aggressiveness, including cantu a tenore from his native Sardinia, beats, orchestrations and a wind section to compositions that fight to hide their pop skeleton, as heard in the ambitious and polyglot IRA, his latest album.

If you want to know more about other Italians who played at the previous editions of the festival visit out website italiamusicexport.com