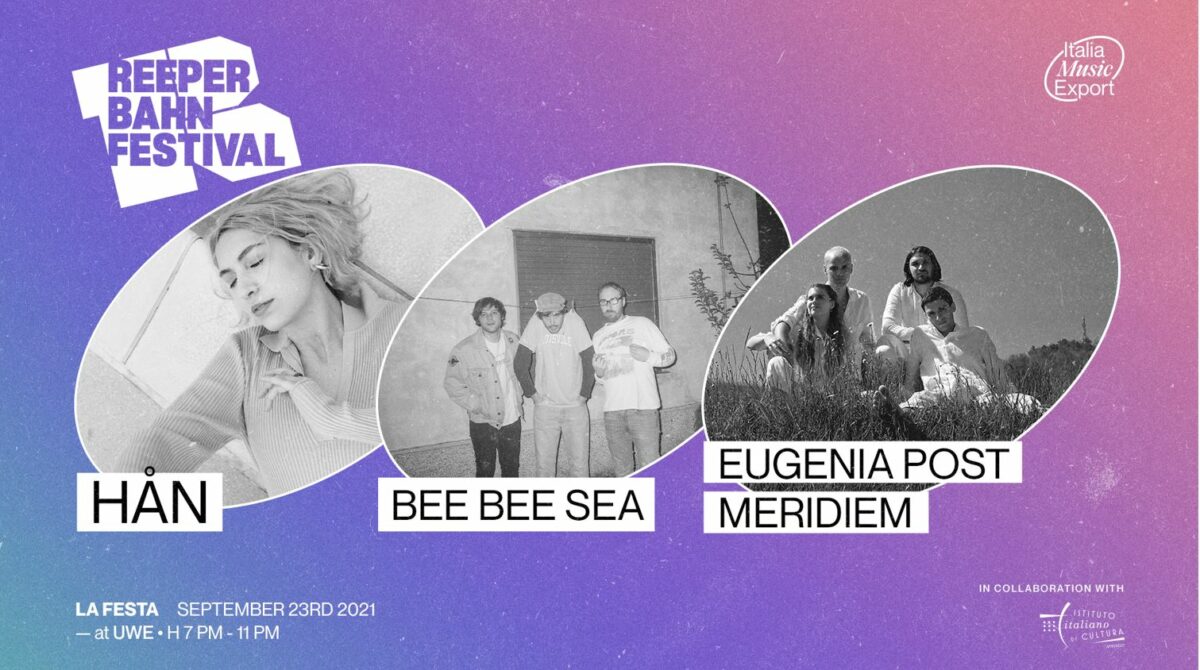 It’s time to mark your agendas: La Festa, the Italian showcase at Reeperbahn festival 2021 will be held on September 23rd at UWE from 7 to 11 pm! Join us at La Festa to discover three incredible artists: EUGENIA POST MERIDIEM, HÅN, BEE BEE SEA.

We look forward to seeing you all IRL finally enjoying a live concert.
Come in and check out these three outstandingly fresh Italian acts!

A chance encounter in Lisbon: Eugenia meets Matteo, a bass player and skilled electronic musician, Giovanni, a guitarist inspired by psychedelia, and Matteo, a drummer whose origins are deeply rooted in jazz.

The gathering leads to a series of songs that as well as showing a wonderful voiceand remarkable songwriting potentials, reveal across the arrangements, soul, indie, folk influences and a pronounced inclination to 60s and 70s psychedelic contaminations finely combined with the roughest 90’s sound textures.

Her debut EP collected millions of streams and gained praise from international music blogs (Gorilla vs Bear, The Line of Best Fit, CLASH). She toured supporting Cigarettes After Sex, Bonobo and showcased at festivals such as Eurosonic Nooderslag, Waves Vienna and Primavera Sound. Now based in London, she is currently recording her debut album that will be released via Sony Music in early 2022.

It’s impossible to listen to Bee Bee Sea‘s music and not want to pogo manically around the room. Clearly indebted to pop punk as much as classic rock, the band preferring short, sharp blasts that punch you in the gut and frazzle your brain.

LA FESTA: the Italian showcase at Reeperbahn 2021 is supported by Italia Music Export in collaboration with the Italian Cultural Institute in Hamburg.