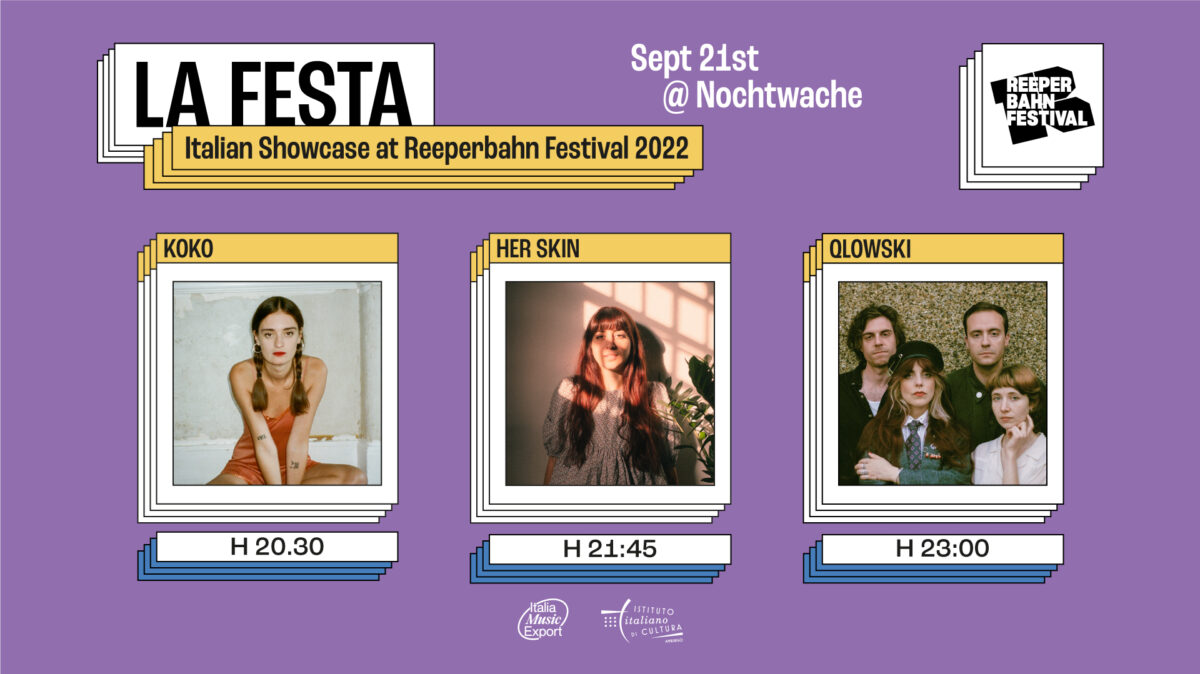 KOKO, Her Skin and Qlowski to play at La Festa, the Italian Showcase at Reeperbahn 2022. Anna Bassy and LaHasna the other two Italian artists performing at the German event!

After a great restored summer festival season, let’s not forget the crucial autumn events.
It’s time to mark your agendas: La Festa, the Italian showcase at Reeperbahn festival 2022 will be held on September 21st at Nochtwache, Hamburg, from 20:30!

Join us at La Festa to discover three incredible artists:

Costanza Delle Rose is know for being on the scene with Be Forest, band in which she writes lyrics, sings and plays bass, and with which she toured extensively from the US and Mexico, to all of Europe and Russia. After moving to London during a year of immense changes in her life, Costanza found fertile ground to bring to life her new project, KOKO, a deeply reflective expression of her most sincere self, with no artifacts or filters to protect her. KOKO is Costanza’s soul out in the open, brave enough to experiment with sound and new lyrical approaches, and free to be fragile and vulnerable to her feelings. After posting an unannounced video for the song “I Want to Be” in the spring of 2021, KOKO debuted with a 7 track album by the metaphorically on-point title “Shedding Skin”, released on October 17, 2021

Her Skin releases her sophomore album ‘I started a garden’ on September 30th, via WWNBB. Originally from Modena, Italy, Her Skin is the moniker for the 26-year-old singer songwriter Sara
Ammendolia. “I started a garden” is a very personal album that deals with the mess of being in your 20s, feeling lonely and nostalgic and out of place and not really knowing where you belong. With delicate and light-hearted melodies and melancholic lyrics, these nine new folk rock songs transport us into the intimate and personal world of the artist.

This year she has performed at numerous festivals including SXSW in Texas, The Great Escape in Brighton, Mondo in New York and Primavera in Barcelona. She has also done multiple tours around the world taking in Italy, France, Germany, Holland, Hungary, India and United States.

Propulsive rhythms, a modern spin on kiwi-pop and a weird combination of dark punk, noise rock and flower pop are still the foundation of their sound but it’s the combination of bandleaders Mickey and Cecilia’s voices that creates an eerie effortless sense of familiarity.

LA FESTA: the Italian showcase at Reeperbahn 2022 is supported by Italia Music Export in collaboration with the Italian Cultural Institute in Hamburg.

But that’s not all! The Festa is not the only event where Italian artists will perform. Anna Bassy and LaHasna will also be present at the festival, giving outstanding performances during the event.

Anna Bassy had written her first songs in 2016, back then only for guitar and vocals. Several years of creativity followed, of the creation and exploration of musical possibilities. Guitar and vocals were joined by a full band, which Bassy used to bring her vision to the stage for the first time in 2019. Traditional sounds from Italy and Nigeria, where her roots lie, along with soul, folk, pop and electronic production techniques are combined into radiating works like “Could You Love Me” or “Wind, Rain” by the ambitious singer-songwriter. Her latest EP “Monsters” (2021) and its eponymous single leaves no doubt that Anna Bassy, after more than 70 concerts across Palermo and Milan to date, is one of the most promising artists of the Italian soul landscape. Those who would like to see for themselves will have the chance to do so this September.

LaHasna might be one of the most promising newcomers at the moment. After playing Montreux Jazz Festival, Opera Festival and SEI Festival, the Milan-based RnB singer will open the showcase at Reeperbahn Festival 2022.

LaHasna is an independent musician from Morocco, born and raised in Italy. Her music is a unique blend of international tribal, alternative r&b, electronic and underground pop sounds.