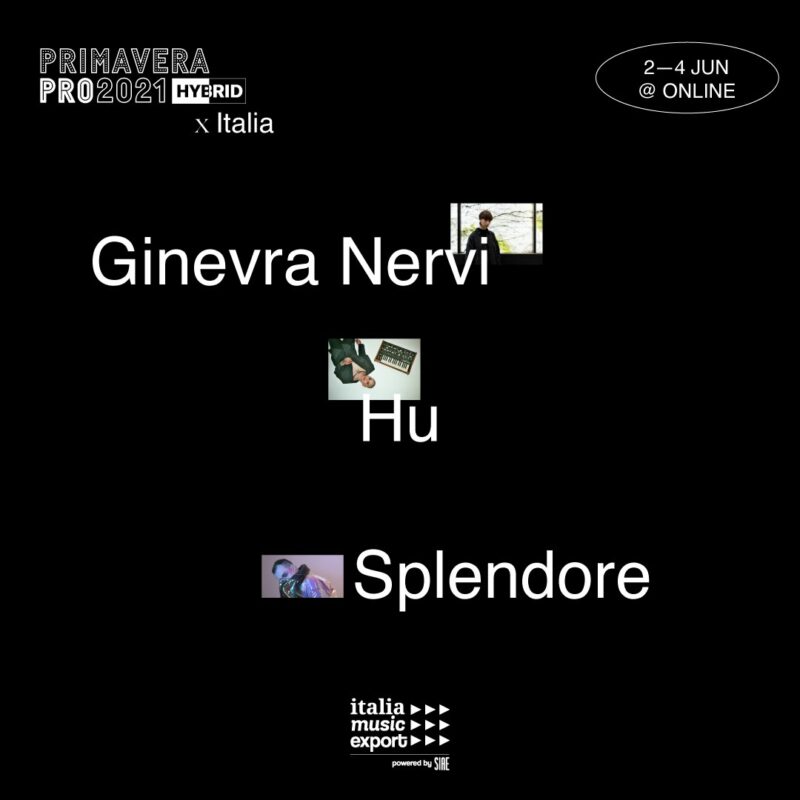 Splendore, Hu, and Ginevra Nervi to play at Primavera Pro 2021

SPLENDORE, HU, and Ginevra Nervi are the Italian artists selected to perform at Primavera Pro 2021. The global music meeting, aimed at professionals of the music industry, will be held both at CCCB and streamed online from 2 to 4 June.

The hybrid event includes a live programme, having the option to chat with other participants in real-time as well as asking questions to the speakers involved; 1-year subscription to the platform that will allow you to rewatch this year’s content and the whole platform’s archive; inclusion in and access to the database of accredited professionals and to the networking area; preferential access to the CCCB’s face-to-face activities.

Charlie XCX would be proud of the hyper-pop produced by the performer SPLENDORE from Italy. His debut OMG, am I really feeling these feelings I’m feeling right now? (Ivreatronic, 2020) keeps intensifying -and with tons of plug-ins- the legacy of how I’m feeling now (Atlantic-Asylum, 2020) of the PC Music diva. Head spinning accelerated rhythms, little noises from a cluster of Apps saturated with messages, audios that intersect in multiple languages ​​ranging from Italian, Spanish, and English. A clash of musical genres and identity genres to crash the binary system. What SPLENDORE calls the EX-HETERO: Queer theory taken to the limit. It seems that the system has been updated on a mobile device that doesn’t have the technological structure to optimize it yet. Never has a broken phone sounded so good.

Hu – The woman and the (disco) machine

Federica Ferracuti is a marvel of musical technology. Before launching her electronic project HU in 2016, she had already trained in improvisation, jazz guitar, piano, bass, and cello. When she finally made the transition to synthesizers and drum machines with her HU proposal, the JäggerMusic Lab team was already waiting to charter her from her native Milan to Berlin with her favorite artists of the year. She is responsible for the music for campaigns for Lamborghini and fashion diva Chiara Ferragni. HU has managed to sell her electro-pop alter-ego well making it an international brand. Her latest singles “Occhi Niagara” and “Neon” have earned her contracts with Sony / ATV and Warner Music Italia that pay her well for revolutionizing the dance floor.

The soundtrack of some of your favorite movies and series may well be composed by Ginevra Nervi. Throughout her career, she has become the reference Italian producer for Netflix Original, Amazon Prime Video, and some of the award-winning documentaries at the Venice International Film Festival. Her process consists of manipulating the vocal timbre through all possible techniques, fleeing from the most obvious clichés of ambient electronics until she finds an original voice. Her latest work Klastós (AWAL, 2021) has been revisited by big international names, from Midori Hirano of Erased Tapes to Lara Sarkissian resident at NTS and Alev Lenz who is responsible for some of the music in Black Mirror.