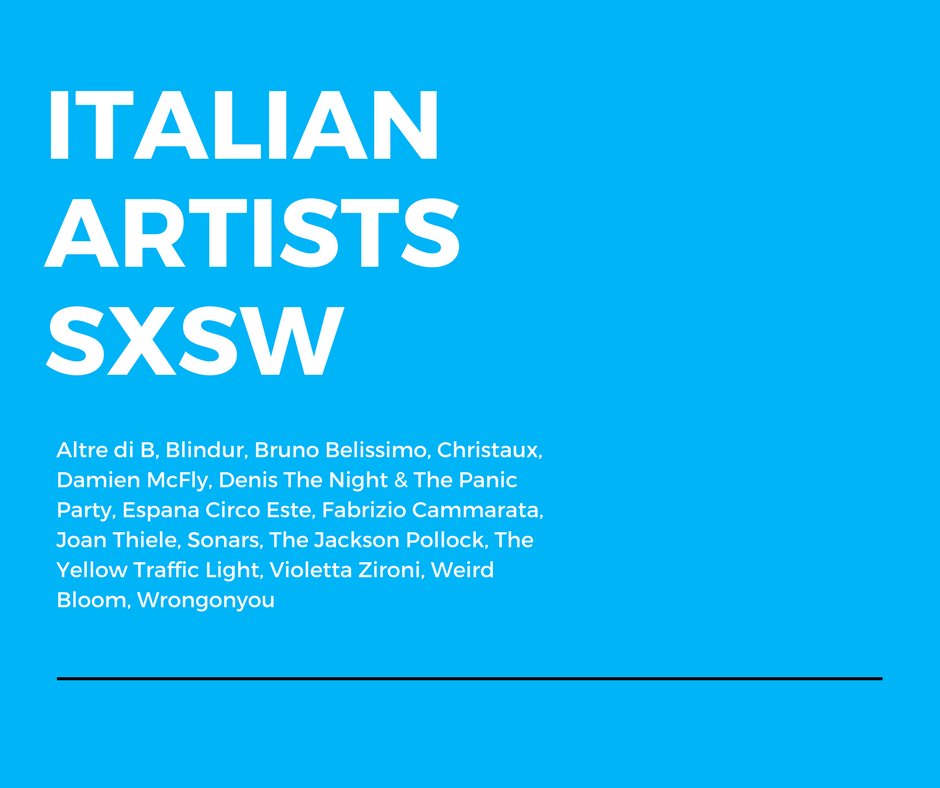 Get to know all the Italian artists showcasing at SXSW festival

SXSW festival is just around the corner and from the 12th to 18th of March fifteen Italian artists of every genre will perform in Austin.
Mark their name on your agenda because you’re going to love them.

Wrongonyou fell in love with folk music and managed to give voice to his heart. His first EP “The Mountain Man” was published by Carosello Records in 2016, while at the beginning of 2018 the single “Prove it” anticipated his first album “Rebirth” which came out on March the 9th 2018. This album is the result of a satisfying journey among many festivals and venues through Italy and abroad: he had the chance to play at Eurosonic, Primavera Sound, Europavox, Bime and Home Festival.

Weird Bloom started in 2015 with the original name of ‘Weird Black’ by singer/songwriter/guitarist Luca Di Cataldo. With the former name the band released their debut full length “Hy Brazil” in 2016. The following months were spent touring and working on an ambitious project that involves Don Bolles (of Ariel Pink) as the co-producer of an album still being developed. In the meantime, Luca composed “Blisstonia”, eleven tracks of psychedelic-pop so perfect to make it difficult to believe the band is actually based out of Rome, Italy. Blisstonia was released in January 2018 and the band is now touring clubs and festivals worldwide.

The Yellow Traffic Light is a psych-rock band from Turin, Italy. After a couple of EPs the band is releasing in March 2018 their first full length “Worlds Within Walls” out on WWNBB Records. Echoes of ‘70s psychedelia surround a more direct shoegaze while the lyrics include hints of Japan.

Sonars are a two piece electro-psych outfit from Bergamo (Italy) and Brighton (UK) . The band was founded by Frederick Paysden and Serena Oldrati, who share guitar, keyboard, synthesizer and bass playing duties whilst also singing, thanks to the use of samplers, drum machines and loop stations, which they use to create their songs layer by layer, drawing inspiration from Alt Rock, Psych Rock and Trip Hop. After their self-produced debut EP “Jack Rust And The Dragonfly IV” they toured extensively, performing over 200 concerts throughout Europe, including Eurosonic Noorderslag in 2017 and several other important European festivals sharing the bill with Slowdive, The Prodigy, Franz Ferdinand, King Gizzard, Thurston Moore, Primal Scream, Spoon, Whitney and Parcels.

With over 400 gigs played in just 4 years of activity, España Circo Este represent a music caravan with a unique and original sound. Latin Pop, Punk, Cumbia, Reggae… all in one word: TangoPunk. “La Revolucion del Amor”, their first full length, received excellent feedbacks and resulted in many sold outs throughout Europe. In summer 2015 they played two official support tours with Manu Chao and Gogol Bordello and many opening concerts to established artists like Dubioza Kolektiv, HeyMoonShaker and Shaggy. Their latest album “Scienze della maleducazione” was released in Italy, Spain, France, Portugal, Germany, Netherlands, Austria and Switzerland in 2017. A Spanish language version of their work, produced by the Latin Awards Winner Loris Ceroni, will be distributed in South America in 2018. Starting from March 2018, España Circo Este will embark in a new world tour.

Joan Thiele is a singer-songwriter of Italian, Swiss and Colombian heritage. As soon as she finished high school, she moved to England to make music, where she developed a unique artistic personality, also thanks to the music she listened to when she was a child. Among her influences are Led Zeppelin, Crosby, Stills, Nash & Young together with many other contemporary electronic musicians. Her first EP was published in 2016, and that same year she was nominated Best New Artist at the Italian MTV Awards. In 2017 she has been chosen by the Italian National Radio Rai Radio Due to represent the country at the Eurosonic Noorderslag Festival in Groningen. “Polite”, her latest single, anticipates the new album out in 2018.

Singer-Songwriter Fabrizio Cammarata tells intimate stories of love and loss through his distinctive soulful voice and elegant guitar mastery, mesmerizing audiences from stages great and small across the globe. Fabrizio conjures fantasies containing light and shadow, passionate tales of his experiences of travel and from his hometown of Palermo, Sicily.
Sharing stages with the likes of Ben Harper, Patti Smith, Daniel Johnston, Emiliana Torrini, he has honed his uniquely romantic interpretation of indie-folk. A life lived is condensed into the new album “Of Shadows”, that was produced with Dani Castelar (Paolo Nutini, Editors, REM) and released on 800A/Kartel Music Group and Haldern Pop Recordings on November 17th 2017. His songs gained international radio airplay and led to media attention from Drowned in Sound, Clash, Popmatters.

Hailing from Padova (Italy), Damien McFly is a driven, passionate and charismatic folk singer who bridges the gaps between old and new. His sound is a great compromise between the timeless vibes of country folk and the catchy appeal of pop melodies. In October 2015 he released his first original album “Parallel Mirrors” and his singles “New Start” and “I Can’t Reply” have collected many airplays and live sessions from international radios in Europe, UK and US. “I Can’t Reply” won the honorable mention in the “International Songwriting competition” (Nashville USA). He has played over 400 gigs throughout Europe, UK and US. He performed at several international festivals including BBC Carfest (Cheshire UK), Home Festival (Treviso, Italy), the International Richmond Film Festival (Richmond VA), the Canadian Music Week (Toronto ON) and the SXSW in Austin, TX. Damien McFly is currently working on his new recordings with Ken Nelson (Coldplay, Paolo Nutini).

Christaux is a new beginning for the Italian artist Clod – former member of Iori’s Eyes. His debut album, “Ecstasy”, has been published in 2017 by La Tempesta International and produced by Mario Conte (previously at work with Colapesce, Meg, Antico and many others). He got rid of minimalism and went towards magniloquent and dramatic pop music. In his songs, we find pop and cinematic atmospheres dancing between the 80s and the future, a strong holiness dressed in a colour mosaic. “Human”, the second single taken from “Ecstasy”, was released in October 2017, together with the stunning video directed by Giulia Achenza and Giada Bossi.

Bruno Belissimo is an Italian-Canadian dj/producer and multi-instrumentalist. His new album “Ghetto Falsetto” came out via La Tempesta International on March 9th. Influenced by Italo/space disco classics and original soundtracks of Italian horror/sci-fi movies from the 70s and 80s, he will bring at SXSW his ‘Infradisco’ live show with a bass guitar and programmed audio and video.

Violetta started writing her first songs at the age of 16, and started touring with a country/blues trio in bars and festivals around the North of Italy. While on the road, she developed what is now her own sound, deriving from different influences of folk, americana and country music, whilst embracing her European and Mediterranean roots.
In 2014 she opened up for the legend Ben E. King, who then invited her on stage with him for a duet of “Stand by Me”. In 2015 she met English/Italian songwriter Jack Savoretti and followed him as a special guest on his long European tour. In 2016 she left Italy to live in London and Berlin, playing gigs, traveling back and forth and writing her songs on the train. During the summer of the same year she left for a long journey across Texas, Louisiana, Alabama, Tennessee, Arkansas. All of these adventures gave her inspiration for her new single and the following EP: “Half Moon Lane”, from the name of the road where she lived when she stayed in London.

Denis The Night & The Panic Party

Denis The Night & The Panic Party is an idiosyncratic collective born three years ago on the road across Italy and United Kingdom and centred around the power trio of Ono Nora Fiorani, Nicola Sbrozzi and Alessandro Gobbi. Seeking musical freedom beyond songs, they started conceiving tridimensional landscapes and soundtracks for raves. Juxtaposing elements from various genres like psychedelia, shoegaze, pop noise, electro and avant-garde, they eschew traditional norms evolving into a music and visual arts collective, featuring other like-minded artists with a simpatico disaffection for conventions. Their stray, eclectic sound has already conquered important audiences, with Panic Party spreading across Europe including Primavera Sound Festival, BBC Introducing Live, Liverpool Sound City and MaMA Festival.

We are just two people who started a band not ‘cause it’s cool, but ‘cause we felt it too bad. So we won’t bother you about how we met, what we eat, what our favorite colors are, other “famous” bands/people we know, what happens if you put a mentos in a fuel tank; don’t expect something polished, we make it RAW ‘n’ LOUD! While playing our music, the more you feel getting hit, the more we are loving you!! Instead of pursuing a fake hi-quality we like to keep it real in an old Lo-Fi fashion, using all sorts of junk we stumble on; after all, every song comes out following an internal stream, schemeless from unknown instruments amplified by post-war P.A. tube amps, distorted by modded homemade stompboxes.
We don’t really know what we are playing or singing or doing in general, but we do it…
…’cause that’s too much fun!!

Uncool since being uncool was uncool. Since 2005 Altre di B have played hundreds of gigs all over Europe, carrying around a lively and energetic sound inspired by bands such as TV on the Radio and the Vines. After bringing the second album “Sport” to Sziget Festival, Ypsigrock Festival as support band of Alt-J and Primal Scream, and to the US West Coast for three DIY tours, Altre di B performed at Primavera Sound and SXSW Festival. Their latest work, “Miranda!”, is a concept album and a tribute to the homonym book written by Quirico Filopanti in 1858 which includes the first theory of time zones. Over the years Altre di B have been the opening act of established international artists such as Eddie Vedder, Foals, Of Montreal, Stephen Malkmus & the Jicks, Django Django and many more.

Blindur is an italian duo formed in 2014 by the singer-songwriter, multi-instrumentalist and producer Massimo De Vita and the multi-instrumentalist Michelangelo Bencivenga. Their sound is inspired by folk and post-rock atmospheres, Irish and Icelandic emotional landscapes mixed with a strong Mediterranean attitude. Although there are only two musicians on the stage, the sound is solid and mesmerizing. Simply enjoy everything with your eyes closed, that’s the trick! In less than three years Blindur have already performed more than 300 concerts between Italy and Europe, taking part to important international music festivals like the Body&Soul Festival in Westmeath (Ireland) and the Iceland Airwaves Festival in Reykjavik, and shared the stage with international artists like Damien Rice, Barzin and Johnny Rayge. After 2 EPs, in 2017 they worked with Birgir Birgisson (Sigur Ros’ sound engineer and producer) and released their first official self-titled album via La Tempesta Dischi.

The two official Italian showcases at Maggie Mae’s Gibson Room and Stephen F’s Bar on March 15th and 16th: Sounds from Italy showcases are brought to you by FIMI (The Italian Federation of Phonographic Industry) and ITA (Italian Trade Agency) with the participation of Italia Music Export.